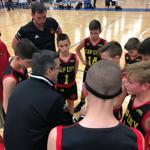 Coach Lou Demos instructing his 2025 Gauntlet team during a timeout

Cap City is gearing up for another dominant season as one of the top programs in New England. With top coaches and players returning, this Fall should prove no different. Cap City will look to build on a Spring that saw over 45 combined tournament championships as a program, with many of their 32 teams winning a tournament. This was by far their most successful season to date.

Cap City looks to focus on both team and individual skill-development this Fall, getting players ready for their Winter season as many players will be key pieces to their school/town teams success. This fall will get them ready to be at the top of their game when they start their school or travel team tryouts.

Each team will participate in  tournaments over the intense 6-week program that will guarantee each player elite practices and games to learn and grow as a player. Director Coach Craigue explained their philosophy in detail, and the importance of balancing games and developing the players in practice.

"The idea is to play competitive games to gain important game experience to carry over into their winter season when they go back to their school teams," Coach Joe Craigue explained, "But the difference about this program is the amount of work we get done in practice. It's fast paced, there's not a lot of standing around. These kids are working. They are here to work. Good players are built in practice."

Cap City provides travel teams for all abilities, with "A", "B" and even "C" and "D" teams in some age groups. Craigue explained that the depth of talent in each age group was what really has caught his eye of late.

"There is nothing B about some of our second tier teams. There were some opposing coaches who were shocked to learn that they were playing our second best team in the Spring. These kids are from every town or city you can name in NH, and they are very talented." Craigue went on to explain, "Our B teams won a total of 15 of our 45 total program championships in the Spring. I think that speaks volumes about the talent from around the State, they all come to compete and get better."

Tryouts are slated to begin Saturday August 24th and (like the Spring session) will have teams based out of Concord, Manchester, and Hampton.

The very best boys and girls in the State will play under Coach Craigue's "Cap City Select Gauntlet" program, for the top prospects in NH.  These teams are customized to max out these ultra-talented players potential and get them playing at their highest level.

For more information about tryout dates, times, and locations, as well as, learning more about what this Fall season has in store, please go to www.capcitybasketball.com/registernow.

Any other questions not answered here can be directed to capcitybasketball@gmail.com