After this past weekend, the program is definitely off to a good start! 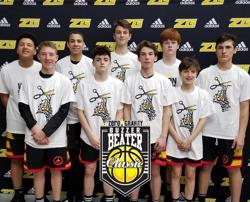 The Cap City basketball program made quite a splash during the first weekend of tournament play and their presence was definitely felt on AND off the court.  With 28 teams in action and approximately 300 kids participating, you could not turn your head without seeing someone in the Cap City red and black.  “It is crazy to see how many kids are here from that program.  They must be doing something right over there,” said one parent from a competing 8th grade boys team Saturday afternoon.

Teams tipped off at 8:00 am on Saturday and did not conclude until 5:00 pm on Sunday.   A total of 94 games were played and they were fortunate enough to have 10 of their teams make it to the final game (with 7 of those teams taking home the championship).  “I am so proud of all of our teams and coaches that are here today.  It has been a few stressful months lining everything up and getting the teams ready.  It is so nice seeing teams having fun and having some success,” said Cap City directory and coach, Joe Craigue.

Cap City returns to tournament play this upcoming weekend in the Zero Gravity “Northern New England Super Cup” and the "Showdown at Lake Sunapee."  Games will be held in various locations around New Hampshire and Massachusetts.  With 28 (out of 31 total teams) taking the court this weekend, they look to come away with some more victories and memories!